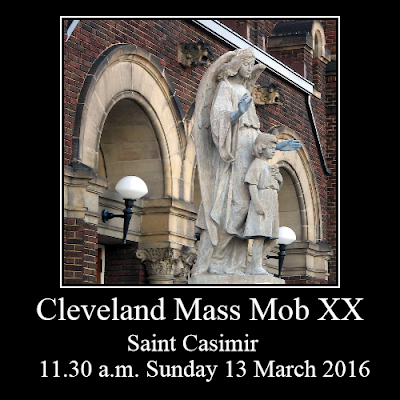 
Once you visit a parish, sometimes you go again.  Over this past year it was suggested to mob particular churches, "you should go to St. Michael's", "you should go to St.Colman's".  We did—last year.  With every mobbing, there are people whom do not realise there has been several mobbings in the past.  One lady has told me at two different mobbings that we should re-visit churches, because some people had not been to them. The second time she told me, "go back to Casimir".  So... 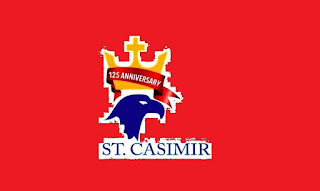 (image borrowed and altered from St. Casimir Hammond Indiana)
at 11:22 AM No comments: 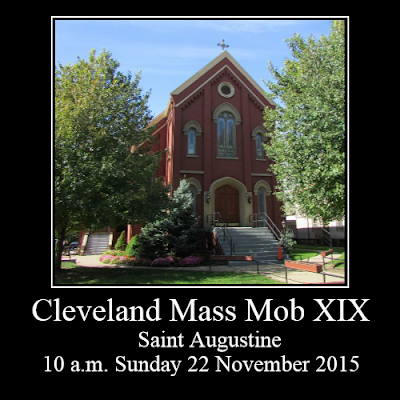 Cleveland Mass Mob XIX
Saint Augustine
10 a.m. Sunday 22 November 2015
2486 West 14th Street
Saint  Augustine began just before the War for the Preservation of the Union. In 1860 it was a mission church, parish status came after the war in 1867. The original church building, though expanded was still too small. In contrast to recent history, a former Protestant church was converted for Catholic use, the old Pilgrim Congregational Church (then called Jennings Road Congregational) begun in 1865 became Saint  Augustine's in 1896. The negotiations for sale and purchase took some time, for the trustees and membership, and neighboring Protestant churches did not want to sell to Catholics. Originally the church had a steeple, it was destroyed by lightning and a resultant fire in December of 1918.
The old South Side (Tremont) suffered during the Great Depression, as did much of the country. After WWII many people moved to larger homes elsewhere, and the construction of highways further de-populated the area.
In the 1960s a Spanish Language Liturgy was offered. That ministry eventually came to St. Michael's. Since then, St. Augustine's has become the ministry for the deaf community, the blind community, and welcomes all with any problems physical, mental, and spiritual. Its hunger center is noticed by the local television stations each Thanksgiving and Christmas. There has been a generation of new reporters to Cleveland that have come for the annual stories, but people are fed every day. St. Augustine's is known nationally for its good works, and help is always needed. The Nuns on the Bus tour stopped by in June 2012 to speak for "faith, family, and fairness" as elements to consider in the federal budget.