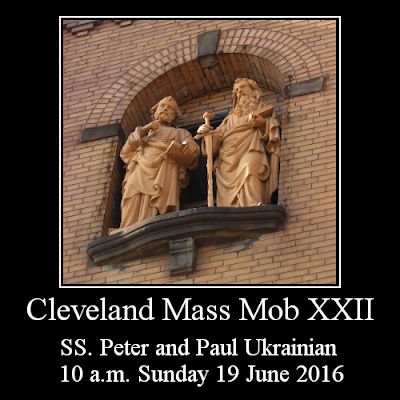 Now, there are 24 self-governing sister churches in the Catholic Church. All equal, all valid, all in communion with each other and the Pope. Most Catholics are in the Latin church of the West. There are 23 churches in the East, most with a similar Liturgy and tradition of the corresponding Orthodox, or Oriental church. So an Ukrainian Catholic service, will look like an Ukrainian Orthodox service.

Now, in the greater Cleveland area we have a Melkite Byzantine* church (St. Elias), a Romanian Byzantine Catholic eparchy (diocese) in Canton with a parish on W. 65th (St. Helena), and a Maronite† church (St. Maron). There are two eparchies in Parma, with several parishes in the area. There is the Ruthenian Byzantine (Cleveland Mass Mob VIII was at Holy Ghost), and the Ukrainian Greek* Catholic. 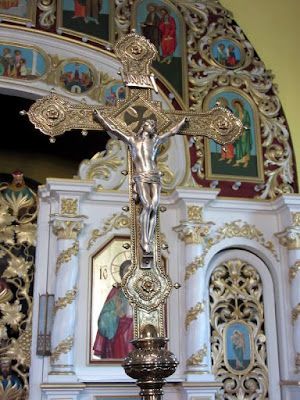 Saints Peter and Paul church looks small from the outside, but stunningly beautiful on the inside. To most it will be a surprise, an ecclesiastic jewel. Over the years, murals, and a stained glass window commemorating a millennium of Christianity has been added. Before 1956 the church had an onion dome, it is now a steeple.
______________________
*Byzantine and Greek are here synonymous
† Maronite has no corresponding church
at 12:12 PM No comments: