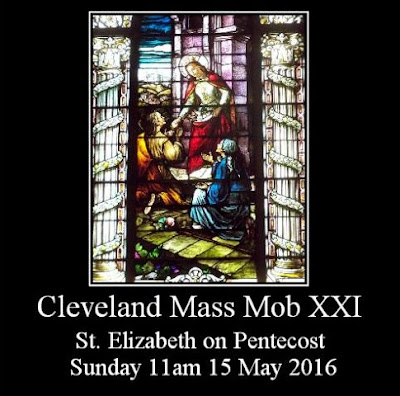 Cleveland Mass Mob XXI
Saint Elizabeth of Hungary
11 o'clock  Pentecost Sunday
May 15, 2016
9016 Buckeye Road
Saint  Elizabeth is the first Hungarian (Magyar) Roman Catholic Parish in America beginning in 1892. The present church was begun in 1918, and dedicated on February 19, 1922. The church and its limestone dome and towers are modelled after Rome's baroque Sant'Agnese in Agone. The beauty and importance of the building earned it a place in 1976 on the National Register of Historic Places.

Cleveland is the most important place of Hungarian settlement in the new world. The Hungarian hierarchy (in Esztergom) had promised that Hungarian speaking priests will always be available for Cleveland. As is so with other people:  ethnicity, religion and culture are bound together. A few years ago there were several Hungarian Catholic parishes in Cleveland, Akron, Barberton, Orange, Elyria, and Lorain. To-day, there are only the two in Cleveland:  St. Elizabeth, and St. Emeric.
at 1:00 PM No comments: