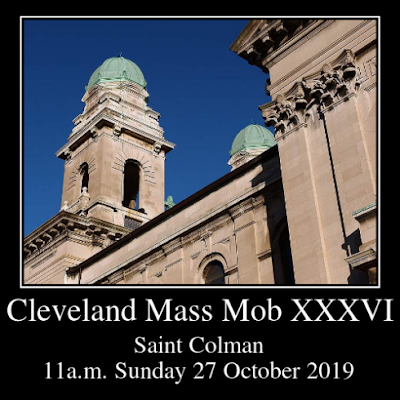 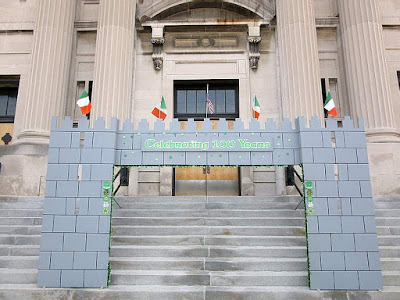 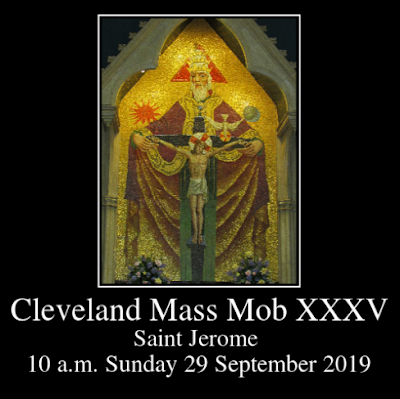 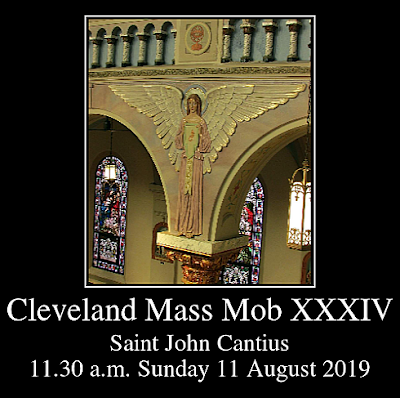 This will be a repeat mobbing. Cleveland Mass Mob X was on All Souls Day 2014.

This area of town is now called Tremont, and few places in this country are so dense with churches. When the smokey mills were being heavily manned by immigrants and sons of immigrants, they built churches for every nation and their creeds that populated them; in addition to the previous Germans and Yankees that came before them. [see and click]

Saint John Cantius was the Polish parish. It is one of the many churches in America, that was built in the Polish cathedral style. It is worth seeing. It is also one of the churches in town with an art deco element, here the angels above the capitals between the bays of the colonnades.
at 12:46 PM No comments:

The exterior of Saint Adalbert, Cleveland is patterned after the neo-classical cathedral in Salzburg; but it is older, the original was bombed during WWII. The original Czech (Bohemian) congregation moved into their second home in 1911. In 1961, there was a merger with Our Lady of the Blessed Sacrament, which had been the first African American parish in Cleveland. The combined parish was closed for public worship, for a time, waiting for Rome to successfully intervene.
at 5:00 PM No comments:

The parish began in 1894, and was separate from the Diocese of Cleveland.  Fr. Anton Kolaszewski was the founding pastor. He earlier was the first pastor at St. Stanislaus, a few blocks away. In 1908, the parish joined the diocese.

The original wooden church had a fire. The present church is from 1914, and is Romanesque in architecture. The windows are from Chicago's Munich Studio, and made by Max Guler. The image above is Jesus calming the Tempest, and speaks to the early history of the parish's relationship to the diocese. The windows are beautiful, and there are smaller figures to appreciate within the larger picture.

Currently a replica of the "Gdansk Shipyard Workers Monument" is in the church. The original was built in memoriam of workers killed in the strike of August 1980. This copy had been in St. Casimir Cleveland from 1985 to 2009, and to save it for the Polish community it was transferred to Immaculate Heart.
at 11:00 AM No comments:

Fr. Thomas Mahon was pastor at St. Thomas Aquinas Cleveland. Glenville (which then was outside of Cleveland) wanted a parish. Fr. Mahon would also become pastor at the new parish of St. Aloysius. People in East Cleveland asked Fr. Mahon to organise another parish, which became St. Philomena in 1902. St. Philomena is still in East Cleveland on Euclid Avenue. At the time, there were no Catholic churches on Euclid Avenue inside the city of Cleveland. That part of Euclid was Millionaires' Row, and no Catholic churches were allowed. On the parallel Superior Avenue there were several, St. Thomas Aquinas being the furthest east. 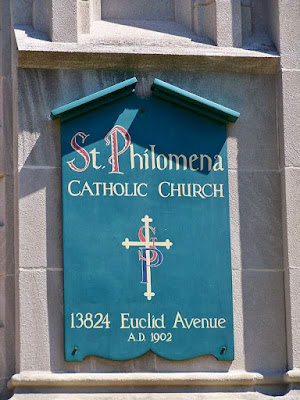 An open door is an invite. 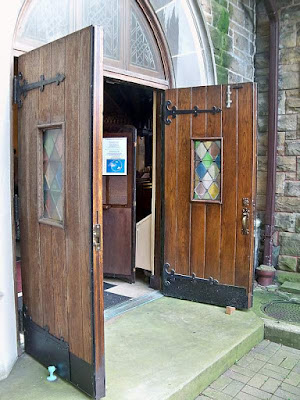 This will be a second mobbing, four years after the first.

The parish of St. Stanislaus was formed in 1873, and at first worshipped at St. Mary's of the Flats (the first Catholic church and later cathedral in Cleveland). In 1879 they moved to the Franciscan St. Joseph on Woodland. In 1881 a new church was built in South Broadway area of Newburgh called Warszawa. The present church was built from 1886 to 1891. St. Stan's exterior was built in Gothic revival style. Of the Catholic churches in the US, built in that style, only St. Patrick's Cathedral in Manhattan is larger.  The church was 232 feet high, with two steeples. St. Michael the Archangel, on the west side, had its taller steeple at 232 feet also. At the time, these were the two tallest buildings in Cleveland. A tornado struck on 21 April of 1909, the twin steeples toppled, and a child was killed. The steeple on St. Wenceslas on Broadway also fell. St. Stan's was rebuilt to a height 122 feet high.

St. Stanislaus is gothic on the outside, on the inside it is baroque, it is the most rococo church in Cleveland. During the year, it is often well garlanded with plants and other decorations. In addition to being a parish church, it is also a shrine church, and the co-cathedral of Cleveland. The shrine is that of St. Stanislaus Szczepanowski (Bishop and Martyr). Above is a window depicting King Boleslaus II the Bold murdering Stanislaus. Stanislaus was bishop of Krakow, a successor to the office was Karol Wojtyla (St. John Paul II), there are items of his in the church.

Saint Stanislaus is a Polish parish church, and the architectural style is loosely called the Polish Cathedral Style in America. Many such parish churches across the country were built on a large scale. Cleveland has a few of them, and we have mobbed them.
at 12:12 PM No comments: