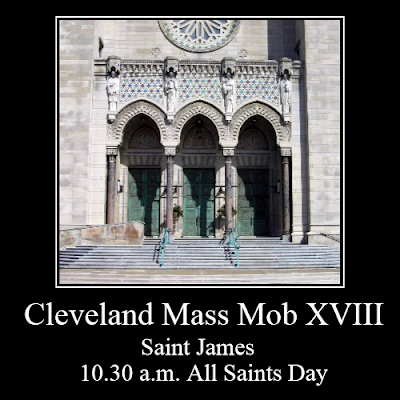 At the turn of the XXth century, population was spreading outward from Cleveland along Detroit Avenue. Bishop Ignatius Horstmann allowed many parishes to be created, at the time of his death (1908) St. James was chartered for the village of Lakewood. The present church was slowly built from 1925 to 1935, with the inside murals finished in 1944.

Fr. Michael Leahy went to Italy in 1924 to look at churches. If you consult art history books (ones for introductory art history), you will find the interior of St. James Lakewood is closely modelled after the cathedral of Monreale Sicily, and touches of Cefalu inside and out, XIIth century Norman-Byzantine (or Sicilian Romanesque) style. St. James also has some arabesques in outside ornamentation. The Great Depression (under Hoover) slowed construction, but Leahy was very shrewd in purchase and payment, and got great value in material and workmanship. Unfortunately that ability has not been retained over the last several years in which leaky roofing has done much damage to the frescoes.

The value of materials that this church is built from is greater than any Catholic church anywhere in the area. The varieties of stone should excite the geologist: more marbles than most would recognise (Levanto, Chiampo Perlato, Carrara, Botticino, Verona, Porta Santa, Rosato, Belgian, Numidian), and there is Algerian onyx, Roman travertine. And on the outside: Minnesota granite steps, Indiana limestone walls, Berea rainbow granite columns with sandstone capitals.

The eight pink columns (of 18) in the nave are of Porta Santa marble.  Porta Santa means holy doors, the ones in St. Peter's Basilica in Rome. The stone was quarried on the Greek island of Chios. These columns were part of some ancient structure, and now are in Lakewood. There are only four churches that have used this stone: St. Peter's and St. John Lateran in Rome, Saint Mark's in Venice, and St. James in America.

Under the period of parish evisceration, St. James had its last Mass on 27 June 2010. The Homecoming Mass was 25 July 2012. As with all the churches re-opened by Rome, the hiatus did great damage to the parish. 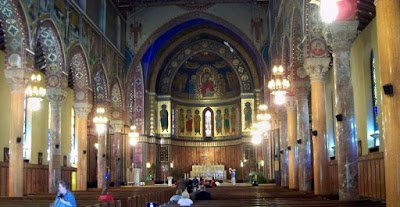