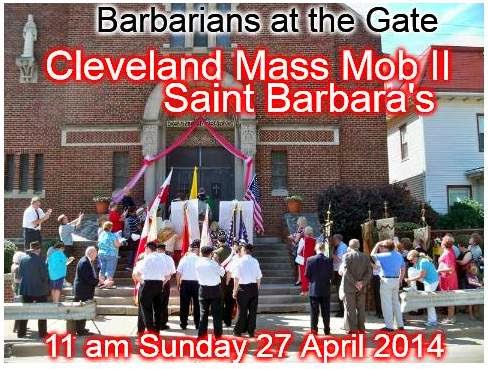 This is a special day for the Universal Church. Divine Mercy (of Jesus) Sunday is a new holiday in the church that is the first Sunday after Resurrection Sunday. This particular Divine Mercy Sunday will see the canonisation of two much beloved saints, former popes, John XXIII and John Paul II.

Saint Barbara Cleveland, on Denison Road bordering Jennings Freeway (Interstate I-176), is celebrating. Musicians are coming from Columbus. Barbara's has been a Polish nationality parish, and this Mass will be bi-lingual. Don't worry, the order of the Mass is the same, and one can pray to God in his own language, while one's neighbour does his own.

Now, although it is a pretty church, it is of a modest size. It has pews for six hundreds. So it is possible for making it standing room only, with folding chairs in the center pathway as was the scene at their Homecoming Mass [clicky here, here too]. Yes, this was one of the parishes that had their appeal of suppression upheld, and Rome ordered to be open forthwith.
at 1:00 PM No comments: 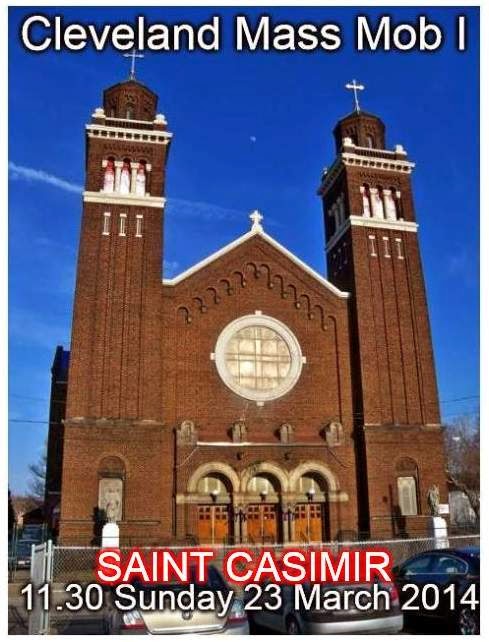 Old and Historic Saint Casimir’s, by Rockefeller Park, is the destination for Cleveland’s Mass Mob One. The regularly scheduled 11.30 Sunday Mass on March 23rd will have a few more than the regulars. On the same date, there are to be other Mass Mobs in Philadelphia and Buffalo.

In an attempt to increase awareness of, and attendance at, grand old parish churches a continuing series of mobs came to be formed. A group of Catholic church enthusiasts wanted more people to experience, and re-experience, the beauty of Catholic community and parish life. They appropriated the idea of a ‘flash mob’, and created the Catholic Mass Mob. Its first child is the Buffalo Mass Mob. After the Associated Press wrote about the Second Buffalo Mass Mob, the rest of America began learning about it. Immediately, people from other metropolitan areas wanted a Mass Mob for their gothams and burgs. After Buffalo, there first came Rochester, and then rapidly: Cleveland, New Orleans, Columbus, Wilmington, Covington, New York City, and Philadelphia.

In the different cities, different organisers have different goals. In some, such as Buffalo and Cleveland, the intent is appreciation of the aesthetic and the spiritual in these churches — a celebration in sacred space. Both of these cities have had Vatican intervention to keep churches open. The prime case is the Basilica [first in the USA] of St. Adalbert in Buffalo. For the second and third Buffalo Mobs, an internet vote determined the church to be mobbed.

The Cleveland Mass Mob wishes “to attract people to come for a Mass, a celebration of Liturgy and Eucharist, in a parish community of an historical, and beautiful church”. The initial field of candidates for future Cleveland Mass Mobs will be selected from the eleven Lazarus parishes that had Masses of Homecoming in 2012 after ‘the hiatus’.
at 3:19 PM 1 comment: