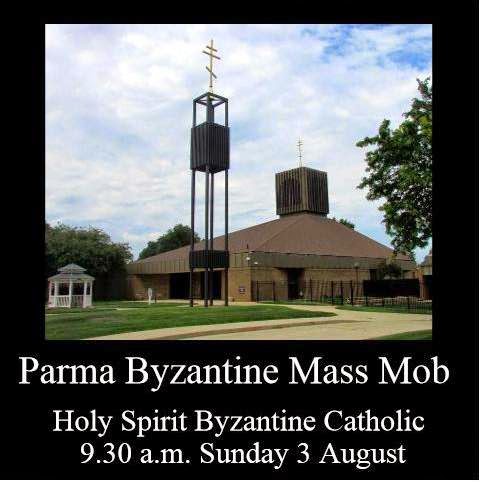 "Let us be attentive". There are twenty-two Eastern Catholic Churches in communion with Rome. Each is of equal dignity, validity, and licitness with the Roman-rite; only unfamiliarity (and ignorance) separates. There is a tendency to stay within the familiar. Often, people become familiar through family. We marry, and we have relatives. Some belong to other churches.

Here in Greater Cleveland, we have had since the late nineteenth century many nations living here together. Parma, perhaps especially, has several churches of both the Eastern Orthodox, and the Eastern Catholic. Fr. James Batcha, pastor of Holy Spirit Byzantine Parma was aware of Cleveland Mass Mob, and he, his parish, and we at Cleveland Mass Mob all invite you, and others to a Parma Byzantine Mass Mob as a complement to Cleveland Mass Mob. More correctly, the term is 'Divine Liturgy'; and that is why our description has from the beginning been, "...Mass, a celebration of Liturgy and Eucharist,". After Liturgy and Eucharist there will be coffee and pastry served to encourage conviviality.

Of course, the Sacrament (Mystery) of the Eucharist holds us together, but the reception is different. The Eucharist is of both Species combined, in the Byzantine-rite. For those who have received Communion in the Roman-rite only, this may be novel. First, one does not stick one's tongue out, it is more like the opening of a baby bird's mouth. The Host is in many pieces in the Chalice, and a Spoon (Cochlear) is used in flicking motion to distribute. Some people pull on a cloth, so that it is under their chins, similar to the function of a handled paten (in case there is a miss, or drop).

Musical instruments will not be present. The human voice is to produce music, and books are in the pews. And we will cross our selves more than Latin base ball players. Mosaics and painted icons are often present. An iconostasis (elaborate painted screen separating the altar from the rest of the church) is customary. May you all "live many blessed years". 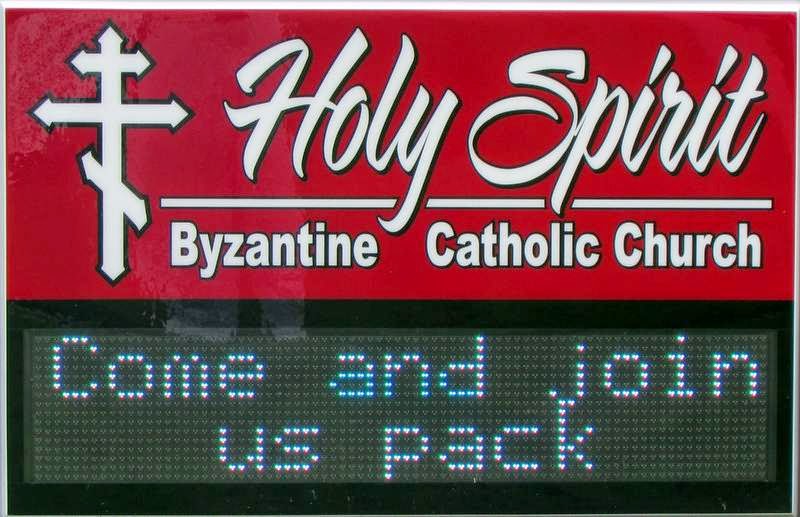 I due capi del Mob Messa è andato a Santa Maria. Well, we went to case the church, to see if the pastor was in. We did not have recent photographs. The last time one of the capos had been there, he was threatened with arrest by Lennon's police [click], it was the day of the parish's eviction.

One of our duties is to gather information to warrant interest in others to join the mob for the Mass. We wanted new pictures. This church will be an exception to the churches we will journey to. It is a new building, with a post Vatican II floor plan, and architecture.

Some people really enjoy stained glass. This glass is dalle de verre (flagstones of glass), and it is mostly abstract. Sometimes a mosaic effect can be produced to show human figures roughly. It was not done here. So, it was even a bit harder to get satisfactory fotos. 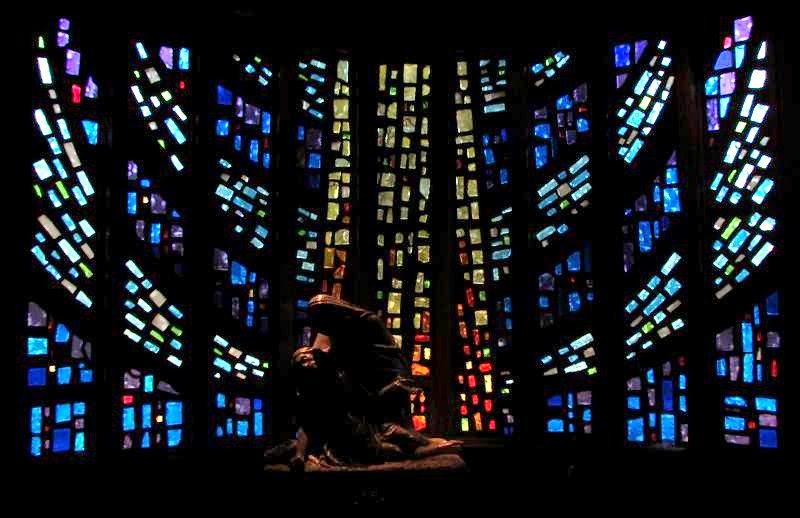 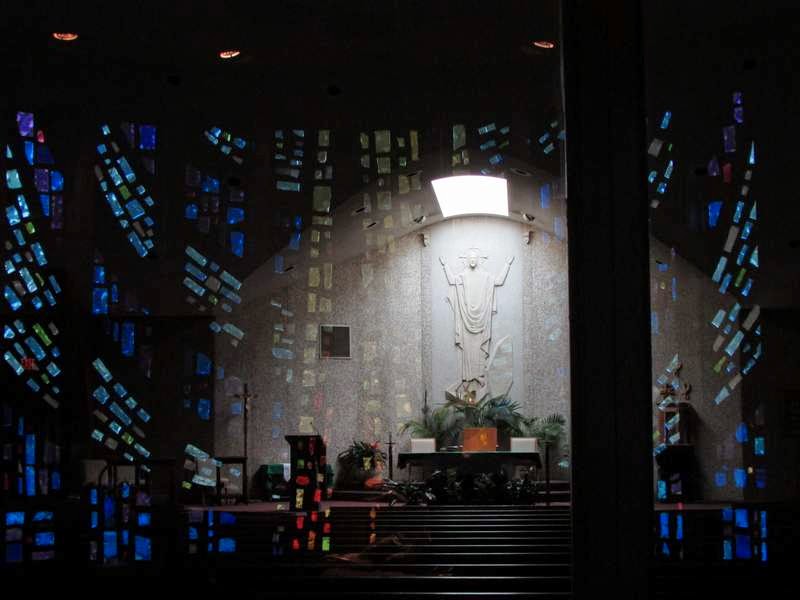 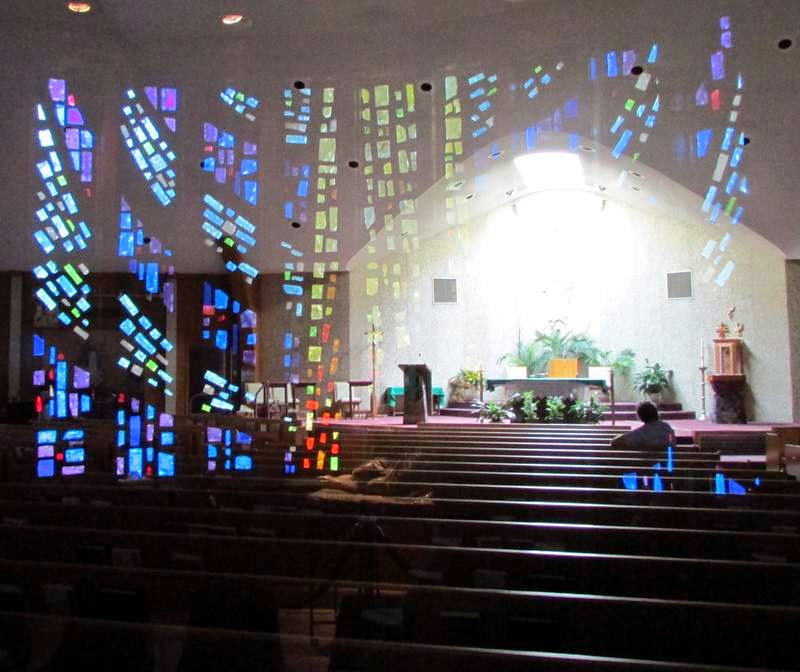 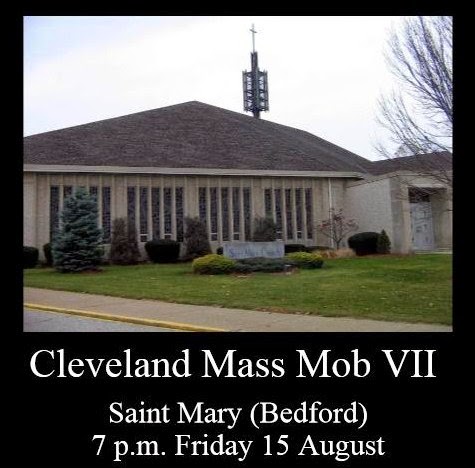 
St. Mary of the Immaculate Conception, Bedford Ohio, began as a mission of Holy Name Newburgh to Hungarian farmers outside of town in 1905. The first resident pastor came in 1921.The present church is the fourth church building. Its first Mass was said on the parish's patroness' feast day 1969.

November 15, 2009 the parish was evicted; but previously an appeal was made to Rome. News came to eleven parishes on March 7, 2012, including St. Mary Bedford, that the appeal was successful because the closure was non-canonical and must be reversed. The hiatus ended with an Homecoming Mass on July 22, 2012; on the same day Saint Barbara, and Saint Patrick West Park had their Homecoming Masses.

Mass Mobs share something of the character of 'Scattered Seeds'. [click] Scattered Seeds are parishioners of St. Cecilia and Epiphany, whose churches were taken by episcopal fiat. For a year they met monthly to have Mass, and a community meal in a series of churches. Over the last two years the Scattered Seeds have found home at St. Mary Bedford.  Most parishes that were closed, had their communities broken, scattered, and not healed. Here in some measure these people had maintained themselves as a parish community.  Jesus and his apostles were the first vagabond and itinerant Christians. There is a long history of wandering together.

Celebrate. Every parish that came out of the tomb, as did Lazarus, has a life to enjoy. Not every community has a magnificent building such as SS. Adalbert, Casimir, and James, or a more modest jewel box as St. Emeric, but each parish has its own chrism and personality. Locally, we have churches such as SS. Stephen, Theodosius, Stanislaus, Colman, Elizabeth, and others, that makes one's jaw drop when they are seen by the observant. As lovely as the sacred space may be, it is the human community of Christian believers that is the parish. And in the oft quoted words of Jesus, told to us by Matthew, it is only necessary to have two or three people and the parish is formed, and created by Jesus, they are to be perpetual. Ordinary people were driven to become activists to save them; and fought to have the unjust, and non-canonical evictions reversed. Cleveland made national, and international news because of the determined Faith and Perseverance of these Christians, some of whom, assembled their parishes to pray in the streets outside their churches that often had been built by the pennies, and sweat of their immigrant forebears. And the reversal of fortune did come. It is time to celebrate, again.

As we began, our raison d' être — "attract people to come for a Mass, a celebration of Liturgy and Eucharist, in a parish community of an historical, and beautiful church", the church is the meeting site, the purpose of that site "a celebration of Liturgy and Eucharist" is the true purpose; so the physical beauty of the edifice is secondary, and tastes always vary. Saint Peter Superior is now more spartan than in generations past, but the white washed gothic ribbing and vaulting is still magnificent, and the stained glass from Columbus is as fine as south German art glass. Saint Mary Bedford is modern, and although i am not a cheerleader for its form, that is no reason not to celebrate. Keep Massing and Mob On!
at 11:00 AM No comments: 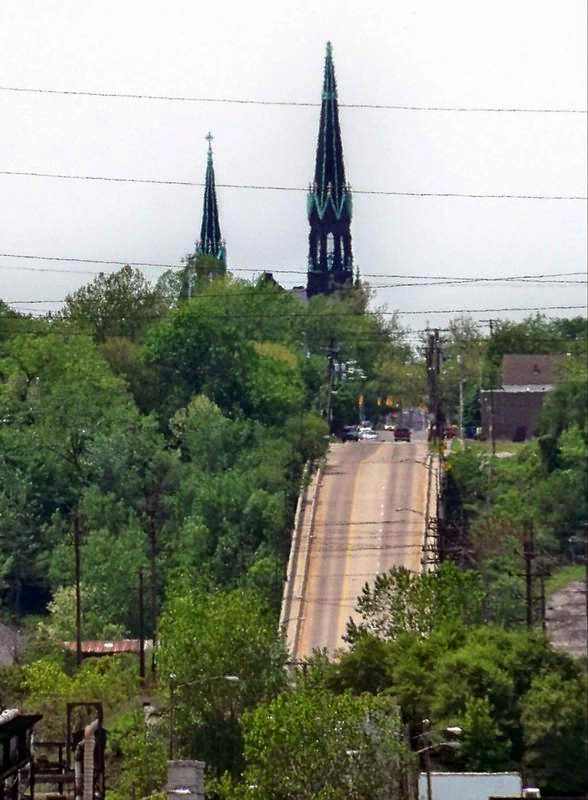 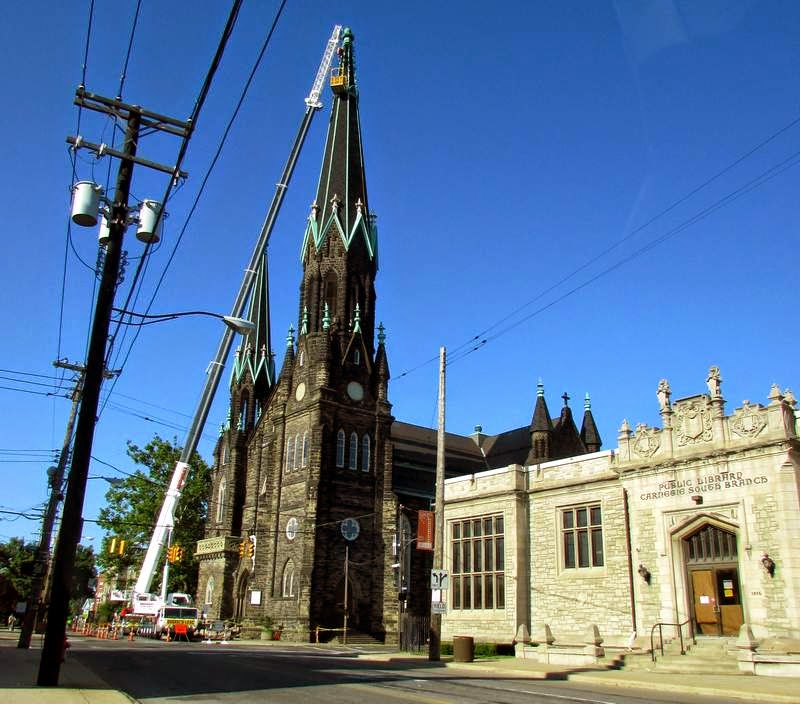 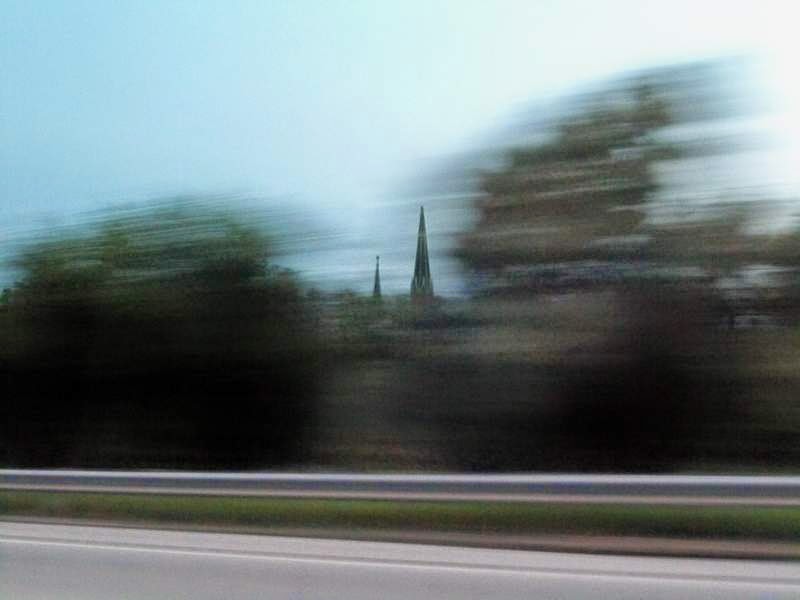 Driving along several of the main roads, freeways and bridges in Cleveland one notices the uneven twin spires of Saint Michael Archangel. As a landmark, outside the concrete, steel and glass knot of skyscrapers of downtown, the only competitor in recognisability is St. Theodosius's, but in the many number of vantage points, no — it is Saint Michael's.

The church was completed in 1892 in romantic, grand eloquent, high gothic, triumphal revival. The then buff, now black, sandstone exterior came from Berea. The soot patina, actually, is more impressive than the original hue. That soot is the mark of the combustion of the steel mills, and other factories, that had been the industrial engine of Cleveland.

Michael's was one of the two, magnificent, German, west side churches. It was, when built, the largest, costliest, and most significant church in the diocese. St. Stanislaus topped out, months earlier, with two identical steeples at 232 feet in 1891(they were destroyed by a tornado in 1907). Michael's to contrast was also at 232 feet, but had the two dissimilar towers. Not till 1924 was there a taller building in the city, and St. Michael's remains the tallest church. 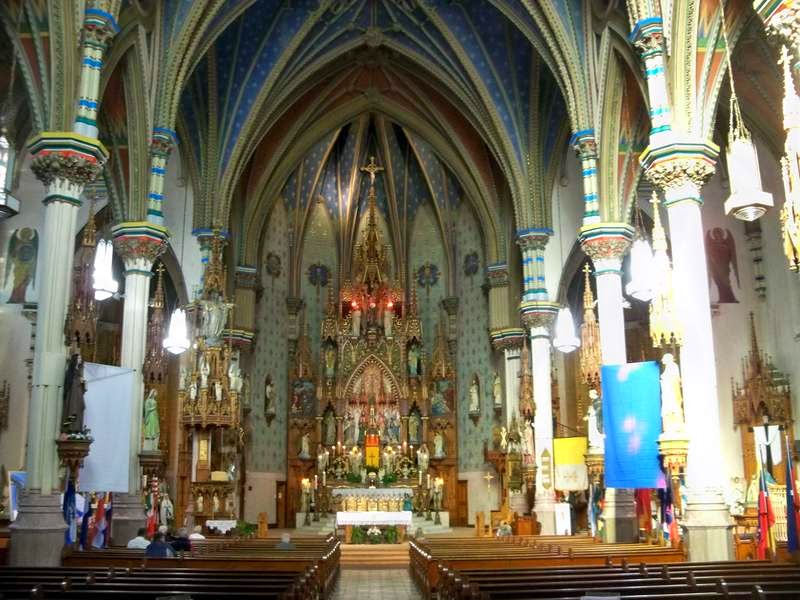 Inside, the church abounds in color. It now is a congregation of the Americas. As the pastor says, "it seats a thousand, 750 if women bring purses".

Cleveland's Mass Mob VI is coming to St. Michael the Archangel to add to the celebration of the parish's anniversary at 9.30 a.m. on Sunday July 20th.
at 8:14 PM No comments: