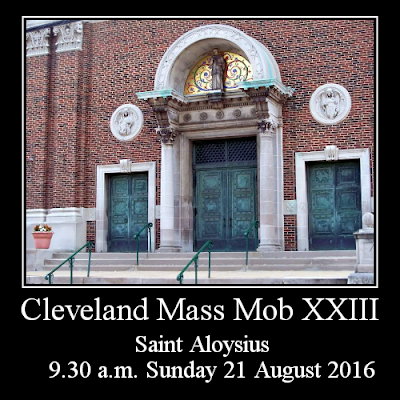 Cleveland Mass Mob XXIII
Saint Aloysius
9.30 a.m. Sunday 21 August 2016
10932 St. Clair Avenue
St. Aloysius in Glenville began as a mission of St. Thomas Aquinas in 1898. Cleveland was expanding and annexed Glenville (and Collinwood) in 1910. The present church is the fifth building to convene the parish. This Italian renaissance basilica style church was erected in 1922. Inside there is so much to see in sacred art. It is one of the many churches worth seeing in Cleveland. If one likes Christian decorative arts, they will be favorably impressed.

Saint Agatha was a separate parish from 1945 to 1975. Saint Joseph Collinwood existed from 1877 to 1994. Nearby St. Philip Neri (begun 1914) was closed in 2008. Aloysius is the only Catholic parish in Glenville and West Collinwood. Demographics can change over the years. Glenville in the interwar period was a heavily Jewish neighborhood and had over twenty synagogues, some of those buildings have become churches. The neighborhood now is almost entirely African-American. St. Aloysius had been Irish. Later it was a favorite of  Bishop Clarence Issenmann, when his residence was in Bratenahl.

A parish is meant to endure through time, through generations. Membership has fluidity over time. Over the generations, a continuing new community arrives; sometimes with familial continuity, and sometimes with new introductions. A Sunday Mass at St. Aloysius is  a warm encounter. They understand that the 'sign of peace' is celebratory. It is a promenade of welcome done twice here.
at 11:11 AM No comments: