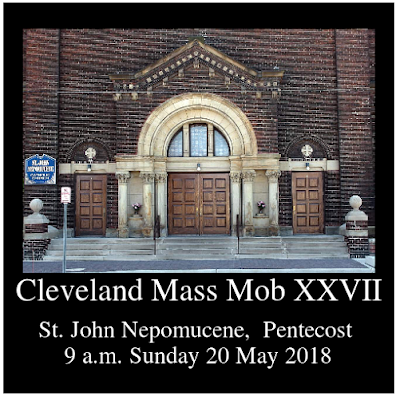 John Nepomucene is not easy for everyone to say, the Czech version is Jan Nepomuk. He is the patron of the seal of confession. John *c.1345, 1393† was thrown into the Vltava River (which runs through the capital city, Prague) by the order of the king, Wenceslaus IV[not the one in the carol]. Wenceslaus wanted to know the confession of his queen. This is why the iconography has John holding a finger to his lips. His feast day is the 16th of May.

It is common when people have settled in America to have parishes named after national patrons. Irish parishes in towns and cities across the land have SS. Bridget, Patrick, Colman, Columbkille, Brendan, Malachy. Polish parishes have SS. Stanislaus, Casimir, Hedwig, Adalbert, Josaphat, Our Lady of Czestochowa. Hungarians named parishes after saints Elizabeth, and Stephen. Everyone names parishes after Mary, and often Saints Joseph, Peter and Paul.

Bohemia is the largest Czech province, and in Cleveland (and elsewhere) Bohemian was synonymous with Czech. The other two provinces are Moravia, and Silesia. The Czechs named parishes after SS. Wenceslaus, John Nepomuk, and Adalbert (some saints are patrons to more than one nation).

Cleveland has three remaining parishes founded by Czechs: St. John Nepomucene, and Our Lady of Lourdes (both in what was Newburgh, and now is called Slavic Village); and St. Adalbert (ClevelandMassMob III). Until recently, the west side had St. Procop, and Maple Heights had St. Wenceslaus. Earlier, there had been a St. Wenceslaus on Broadway. The highways took that parish, and St. Martin. Holy Family was also on the east side and closed in the 1990s.
at 11:11 AM No comments: